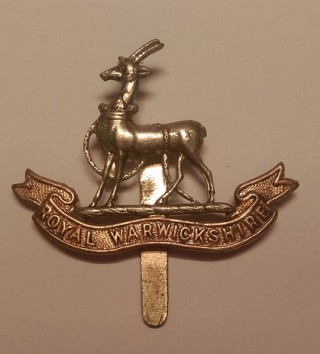 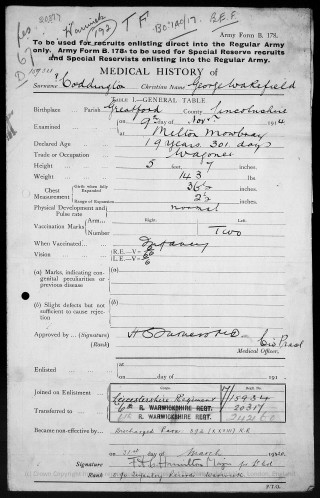 In 1901, when four years old, he lived with his parents on Baslow Road, Greatford, next to the Rectory. Charles Coddington was a cattleman and his older son John, then aged 12, was already at work as farm labourer. In 1904, George Coddington was admitted to Pickwell School, in the village of that name. This record gives his date of birth as the 10th January, 1896 (perhaps a clerical error).

In 1911 George Coddington, now aged fourteen, was employed as a living-in general farm worker at Muston Gorse, Muston. The farmer was Mr John Thomas Carman. However, his last employer before joining the army was Mr R. Doubleday, at Colsterworth, who employed him as a farm worker/wagoner.

George Wakefield Coddington enlisted on the 9th November, 1914, at Melton Mowbray. He was 17 years 10 months old. However, when he enlisted, he described himself as a wagoner, from Greatford, Lincolnshire, born in 1895 (thereby disguising his true age). At his initial medical examination at Melton Mowbray on 9th November, 1914, his age given incorrectly as 19. He was stationed in Leicester for 14 days and then sent for training to Aldershot Camp before departing with the British Expeditionary Force to France on 29th July, 1915. He was posted as Private 15934, 7th Bn, Leicestershire Regiment.

On 14th July, 1916, he was invalided back to England from Etretat on board HMHS (His Majesty’s Hospital Ship) Asturias, suffering from piles, and was sent to Rugeley Camp. As an aside, it is interesting to note that the Asturias had been a luxury liner of the Royal Mail Steam Packet Company, built in 1908. Wikipedia tells us that “J.R.R. Tolkien was another of the servicemen shipped back to the UK on Asturias. On 27 October, 1916, as his battalion attacked Regina Trench, during the Battle of the Somme, he came down with trench fever, a disease carried by lice, which were common in the dugouts. Tolkien was invalided to England on 8 November 1916, and remembered there being salt water baths on board.” The ship was later to be torpedoed en-route between Avonmouth and Southampton, on 20th March, 1917, and declared a total loss. Thirty-one were killed, with a further twelve missing. However, as Wikipedia points out, if she had gone down while still packed with wounded men, the casualties would have been much higher, as many of them could not even move.

In total, he had served in France for thirteen months, Italy for fourteen months and Belgium for five months, and was awarded the 1914/1915 Star, the Victory Medal and the British War Medal. He was discharged on 31st March, 1920, at which time he gave his permanent address as Lees Barn, Radcliffe on Trent.

Electoral Rolls indicate that George Wakefield Coddington went to live at a house on Waltham Road, Branston, Leicestershire, and was living there by the spring of 1921. He was still there in 1939, when he described himself as a “getter and fitter of ironstone quarry, heavy worker”. He married Lydia (maiden name not known) apparently after 1930, but it is not certain of there were children.

His death was registered in 1971 at Melton Mowbray. He was then 74 years old.

1914-15 Star, the British War Medal and the Victory Medal
Served in
Warwickshire Regiment (2)