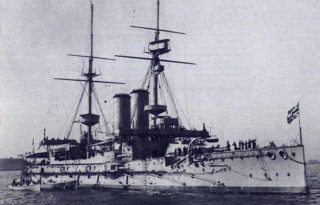 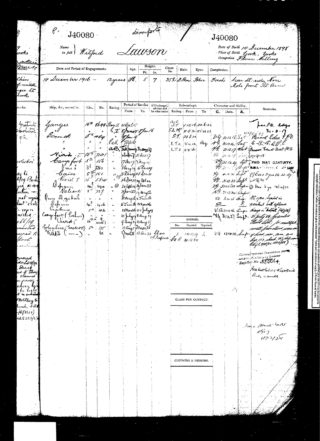 Wilfred Lawson has been identified as being the young man known in Bottesford as John Pratt and identified by this name on the Bottesford Methodists Roll of Honour. Please click on this link for details of his family background.

He joined the navy at Devonport on the 14th December 1916, an 18 years old who had worked as a ‘flour miller’. His older brother Frank had been killed in the first month of the Battle of the Somme only five months months previously.

During the war years, he underwent training at HMS Ganges and HMS Vivid, before joining the crew of the pre-Dreadnought battleship HMS Exmouth from the 9th January 1916 to the 31st August 1917. During this time the Exmouth was at the East Indies Station and undertook convoy protection on the route between Colombo and Bombay, before returning to Devonport. ABS Lawson then served on HMS Carysfort from the 17th December 1917 to the 7th May 1919. The Carysfort was a light-cruiser which was the flag-ship of the Dover Patrol between 1914 and 1933.

After leaving the Carysfort, he served on a series of ships the light-cruiser HMS Cairo, the Queen-Elizabeth Class Dreadnoughts HMS Valiant and HMS Queen Elizabeth, and the monitor HMS Erebus. The final entry on his service record is for a ship called the destroyer HMS Westcott. He left the navy in 1928.

He returned to civilian life, and there is a record of him living with his widowed mother, Emily Lawson, at Belper in 1939. The date of his death is uncertain. Two Records from the General Register have been located, one at Hull in 1951, the other at Whitby in 1980. The earlier has been entered in the following record, but this may be incorrect, pending any further information that might become available.

During his wartime service AB Lawson served on the battlesip HMS Exmouth. After the war he remained in the Navy and served on a variety of ships including the cruiser HMS Carysfort, the Dreadnoughts HMS Valiant and HMS Queen Elizabeth, and the monitor HMS Erebus.
Served in
Royal Navy (6)