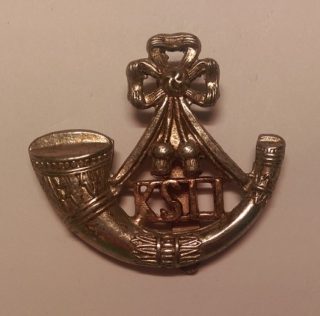 John Walter Cooper is one of the men named on the Bottesford ‘church list’ of WW1 Servicemen.

John Walter Cooper was born in 1885 in Bottesford. In the 1901 census, Mary Cooper (66 years old, born in Redmile) lives with a daughter named Fannie (aged 38) and a grandson, John W. Cooper (a 15 year old builder’s clerk). They lived in a cottage in a paddock on the left hand (western) side of The Nook (now Pinfold Lane), close to Rectory Farm. The cottage is remembered as having been a long, mud-walled building with a thatched roof that came down nearly to the ground. However, by the time of the 1911 census, John Walter Cooper was lodging in Old Trafford Manchester and working as a clerk in a Brewery.

The identity of John Walter’s father has not been found, but it is probable that Fannie Cooper was his mother, Mary Cooper his grandmother.

John Cooper married Isa Statham on the 21st November, 1914, in Bottesford parish church. They had a son, Dennis, who was born in Bottesford on the 18th February, 1915, and a daughter named Winifred born on the 10th April, 1916, in Didsbury, Manchester.

On his Attestation papers, John Walter Cooper gave his home address as The Nook, Bottesford, and his occupation as a builder’s clerk. He first reported for duty on the 27th July, 1916, at Leicester

He had two Service Numbers during his military service, 29261 and 31609 while a Private in the 2/5th Leicestershires, and then Private, specialised as a Signaller, in the King’s Shropshire Light Infantry, which seems to have been his main posting.

While serving in France in the KSLI, he gave his home address as Eleanor Road, Chorlton-cum-Hardy, Manchester. The last date written on his service record was the 3rd February, 1919, suggesting that he was discharged then or not long afterwards. He was awarded the British War Medal and Victory Medal.

Electoral rolls reveal that John Walter and Isa Cooper lived at 35 Newton Road, Urmston, Lancashire in 1926 and 1928, and by 1930 had moved to 227 Darwen Road, Turton, Lancashire. Otherwise, there is little to add, other than that Isa appears to have died at Stockport, Cheshire, in 1962, aged probably 84, while John Walter Cooper appears to have died in 1953, also in Stockport, aged 68.