Sunlit days of summers past 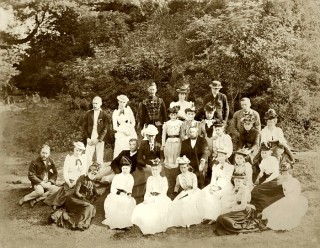 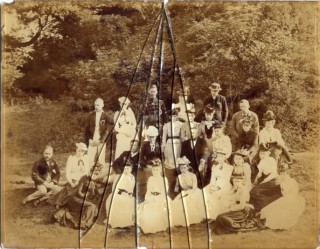 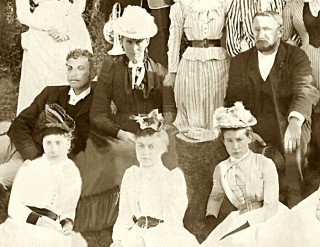 Believed to be Daniel Richmond Daybell left of centre. 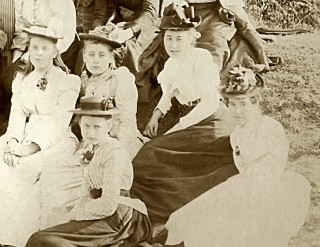 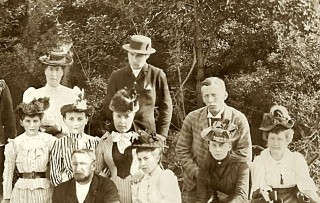 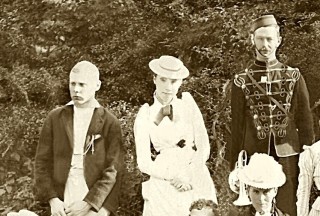 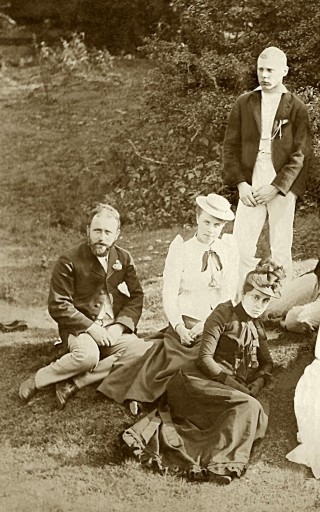 These pictures show an old photograph, belonging to Mary Owen (nee Topps), of an elegant garden party. The photograph had been mounted on stiff cloth and covered with a sheet of bevelled glass to which it had been, or had become, bonded. Tragically at some time in the past the glass had been fractured, and the picture was in a delicate damaged condition. Removing it from the broken cover glass was not possible, but restoration to something close to the original image has been achieved by the expert attention of Sheila Marriott, using digital wizardry to remove the cracks and put the damaged features back together. This was painstaking work, and we are indebted to Sheila for her support.

Mary believes that the gentleman lounging in the centre of the group, with curly hair, is her late grandfather, Daniel Richmond Daybell. He was born in 1869 and married in 1905 after leaving Bottesford. She thinks that her grandmother is not in the picture, and that it is most likely that the picture is Victorian rather than Edwardian.

Who are the other people in the picture, and where was it taken (and when)? Mary and husband Malcolm are not certain of any of the other people, but think it likely that the Misses Beatrice and Nellie James are among the “girls”. These sisters lived in No.6 Church Street, and were well known as teachers of music and dance. Another is probably their cousin Miss Edith James who owned the terraced house in Chapel Street next to Fleming’s Hospital. Apparently all the Miss Jameses died in the 1950s.

We would be grateful for any identifications and background information. The man in uniform at the back, proudly showing off his finery, is possibly from the  Belvoir Militia.  Their uniforms were heavily braided. He is carrying a cornet, suggesting that he may have been a bandsman.

The James family were well established in Bottesford and Easthorpe. Deeds from No.10 Manor Road, Easthorpe, kindly lent to us by Mrs Christine Coot, show that this house was bought by Miss Eleanor James in the ‘Duke’s Sale’ of 1920. She died in 1943 while living at No.3, Wyggeston Terrace. Deeds kindly lent us by Mr Lol Pickin show that a Mr Edward James purchased Nook Farm during the 1920 sale. It is tempting to expect that all these people were related, but we have nothing to prove this was so.

Sheila Marriott is well known locally for the wonderful Barkestone le Vale local history project. In addition to bringing together the Barkestone project’s great collection of photographs, maps and the village’s ‘family tree’, Sheila is a genealogist and digital picture restorer. If you haven’t visited its annual autumn exhibition in Barkestone then you have really missed something.