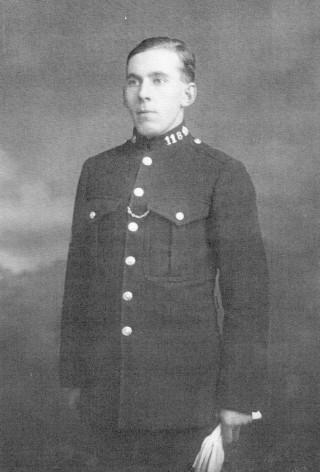 This is a brief history of Police Sergeant Arthur Ernest Bradshaw and Family by his son, Michael Bradshaw. Michael and Elizabeth his wife live in Adelaide, South Australia, having left the UK some years ago.

“Initially my father came to Bottesford first in 1929-30, as a new Police Constable, seconded to the Police station in Queen Street. The Sergeant at that time, I understand, was Sergeant Allen.  Being a single person he obtained lodgings at The Six Bells in Church Street, the home of the Bateson family. Mrs Ada Bond, (née Bateson) remembers fondly my father staying at her house when she was a small child. My father’s initial training was in Hinkley, Leicestershire, and he was born and raised in Loughbourgh.  I’m not sure of exactly how long he was in Bottesford for the first time, but after this initial posting he then returned to Market Harborough, and subsequently met and married my mother Vera Bradshaw (née Pitts), she being born and raised in Great Bowden, Leicestershire. During the war years they lived in Police Married accommodation, firstly at Hallerton Leics, then until 1948 at Tilton On The Hill Leics. Early in 1948 he returned to Bottesford as a Sergeant, accompanied by wife and three children.“