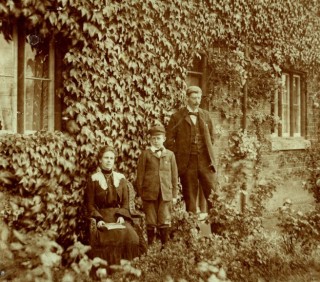 Can anyone supply more information about this photograph and the people in it?

Mrs Webster, who lives at the Old School House, Grantham Road, has let us copy this photograph which shows a family group at the School House during the Edwardian era. There is no label on the photograph, other than the name of the photographer, Edwin Rey.

The 1901 census for Bottesford records eight addresses on Grantham Road, among which No.8 was occupied by:

It is most likely that these are the three people seen in the photograph.

In the Book of Bottesford, Michael Honeybone records that Mr Collett was in charge of the village school at the end of the 19th Century (p.90), and then that in 1902 he had written How to Spend a Holiday in the Vale of Belvoir which was reprinted by Harrison’s of Grantham as A Guide to Belvoir, Bottesford and District (p.105). Honeybone also reproduced (p.107) a description of Bottesford during the First World War, written by Mrs Jordan, nee Smith, who states that Mr Collett (‘the Old Boss’) was still headmaster.